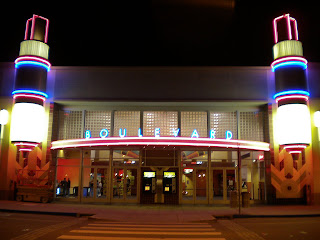 The Boulevard Cinema is the centerpiece of Petaluma's new Theater Distirct, which was inspired by some local girls who started a movies in the park event which eventually led to the building of a real theater and movie premier with George Lucas.  And all of the girls were given jobs at the new theater and each also has a star on a walk of fame in front of the theater!
Posted by Denise Olrich at 11:47 AM

LOVE this! But I think we need our names on some fricken stars, SOMEWHERE!